gargoyle is a technique for hiding all of a program’s executable code in non-executable memory. At some programmer-defined interval, gargoyle will wake up–and with some ROP trickery–mark itself executable and do some work: 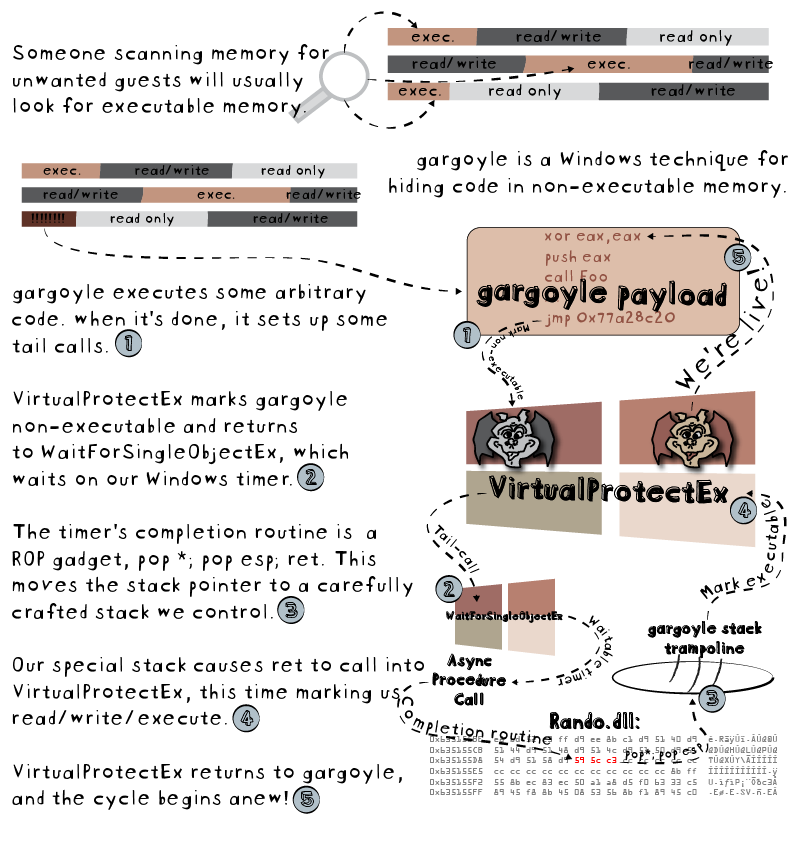 The technique is demonstrated for 32-bit Windows here. In this post, we’ll dig through all the gritty details of how it’s implemented.

Performing live memory analysis can be a really expensive operation–if you use Windows Defender, you may have been on the business end of this problem (just Google “Antimalware Service Executable”). Since programs must reside in executable memory, a common technique for reducing computational burden is to limit analysis on executable code pages only. In many processes, this will reduce the amount of memory to analyze by an order of magnitude.

gargoyle demonstrates that this is a risky approach. Through the use of Windows Asynchronous Procedure Calls, read/write only memory can be invoked as executable memory to perform some tasks. Once it has completed running its tasks, it returns to read/write memory until a timer expires. Then the loop repeats.

Of course, there’s no InvokeNonExecutableMemoryOnTimerEx Windows API. Getting the loop going requires some work…

Asynchronous programming allows some task to be executed at a later date, potentially in the context of a separate thread of execution. Each thread has its own APC Queue, and when a thread is put into an alertable state, Windows will dispatch work from the APC queue to the waiting thread.

There are a bunch of ways to queue APCs:

And a bunch of ways to enter an alertable state:

The combination we’ll be employing is to create a timer with CreateWaitableTimerand then queue APCs with SetWaitableTimer:

The default security attributes are fine, we don’t want to manually reset, and we don’t want a named timer. So all of the arguments to CreateWaitableTimer are 0 or nullptr. This function returns a HANDLE to our newly minted timer. Next, we must configure it:

The first argument is the handle we got from CreateWaitableTimer. The pDueTime argument is a pointer to a LARGE_INTEGER that specifies the time of the first timer expiry. For the example, we simply zero this out (expire immediately). The lPeriod defines the expiration interval in milliseconds. This determines the frequency at which gargoyle is invoked.

The next argument, pfnCompletionRoutine will be the subject of some considerable effort on our part. This is the address that Windows calls from the waiting thread. Sounds simple, except that none of gargoyle’s code is in executable memory at the time the APC is dispatched. If we were to point pfnCompletionRoutine at gargoyle, we’d end up with a data execution prevention (DEP) violation. Weird, I know.

Instead, we use an exotic kind of ROP gadget that will reorient the stack of the executing thread to the address pointed to by lpArgToCompletionRoutine, the next argument to SetWaitableTimer. When the ROP gadget rets, the specially crafted stack helpfully calls into VirtualProtectEx to mark gargoyle executable before tail-calling into gargoyle’s first instruction.

The last argument has to do with whether to wake up a sleeping computer when the timer expires. We set this to false for this proof of concept.

The final piece is the venerable VirtualProtectEx, which marks memory with various protection attributes:

We are going to call VirtualProtectEx in two contexts: after gargoyle has completed executing (before we make the thread alertable) and before gargoyle starts executing (after the thread has been dispatched for APC completion). See the infographic for more details.

In this proof of concept, we keep gargoyle, the trampoline, the ROP gadget, and our read/write memory all in the same process, so the first argument hProcess can be set equal to GetCurrentProcess. The next argument, lpAddress, corresponds to the address of gargoyle and dwSize corresponds to the size of gargoyle’s executable memory. We provide the desired protection attributes to flNewProtect. We don’t care about the old protection attributes, but unfortunately lpflOldProtect is not an optional argument. So we will point this at some empty memory we’ve set aside.

In the usual case, ROP gadgets are used to defeat DEP by doing a little bit of work at a time to build up a call into VirtualProtectEx to e.g. mark the stack executable then tail call off to an address on the stack. This is often useful in exploit development, when an attacker can write to non-executable memory and needs a way to animate it. It is possible to chain some number of ROP gadgets together to do quite a bit of work.

Unfortunately, we do not have control over very much of the context of our alerted thread. We can control (a) the instruction pointer eip via pfnCompletionRoutine and (b) a pointer on the stack of the alerted thread at location esp+4, i.e. the first argument to the invoked function since it is a WINAPI/__stdcall callback.

Fortunately, we already have full execution before the APC even gets queued, so we can carefully craft a new stack–a stack trampoline–for our alerted thread. Our strategy is to find a ROP gadget that replaces esp to point at our stack trampoline. Anything of the following form would work:

It’s a little exotic, since functions don’t usually end with a pop esp/ret, but fortunately Intel x86 assembly produces very dense executable memory thanks to variable-length opcodes. Anyway, there’s one such gadget in 32-bit mshtml.dll at offset 7165405 from base:

We set lpArgToCompletionRoutine equal to the void* VirtualProtectEx argument so that the ROP gadget rets and VirtualProtectEx gets called. When VirtualProtectEx receives this call, esp will be pointing at void* return_address. We’ve conveniently set this to–you guessed it–our now-executable gargoyle, and Bob’s your uncle!

Let’s pause for a moment and take a look at the read/write Workspace we set up before creating the timer and kicking off the loop. The Workspace contains three main components: some configuration to help gargoyle bootstrap itself, stack space, and the StackTrampoline:

You’ve already seen the StackTrampoline, and stack is just a chunk of memory. The SetupConfiguration looks like this:

Inside of the proof of concept harness in main.cpp, the SetupConfiguration is set up this way:

Now that you have an idea of what the Workspace looks like, let’s get back to gargoyle. Once the stack trampoline has invoked VirtualProtectEx and the tail call kicks in, gargoyle has execution. At this point, esp is pointing at old_protections since VirtualProtectEx is WINAPI/__stdcall and will clean up after itself.

Notice we’ve put an extra argument, void* setup_config, at the end of StackTrampoline. This is conveniently placed as if it were the first argument to invoking gargoyle as a __cdecl/__stdcall function.

This allows gargoyle to find its read/write configuration in memory:

Now we’re ready to rock. esp is pointing at Workspace.stack. We’ve got a hold of a Configuration object in ebx. If this is the first time gargoyle is called, we’ll need to setup the timer. We check for this by looking up the initialized field on Configuration:

If gargoyle is already initialized, we jump past all the timer setup.

At this point, you get to execute arbitrary code. For the proof of concept, we pop a message box:

The source for the proof of concept is on github and you can try it out easily, but you must have the following installed:

You must run gargoyle.exe in the same directory as setup.pic. By default, this is in Debug or Release, the output directories of the solution.

Every 15 seconds, gargoyle will pop up a message box. When you click ok, gargoyle completes with the VirtualProtectEx/WaitForSingleObjectEx tail call.