Getting Started with Reverse Engineering

The ability to reverse engineer binaries is extremely important in many settings. Whether analyzing malware (or writing malware…), delving into undocumented APIs, or even just for fun, you will not have the source available. Any kind of thorough reversing effort will invariably involve staring at lots of assembly (or perhaps Java bytecode/.NET IL for managed code).

There are three kinds of reverse engineering analysis:

One basic item of static analysis we can perform on a binary is to “run strings” on it. The Strings program, available for free as part of the Sysinternals suite of tools, dumps out all of the–you guessed it–strings that appear in the binary. Install Sysinternals and put it into your path. Navigate to the directory of the binary, and issue the command:

The following helpful prompt is given in response:

Let’s give the defaults a try:

Cutting out some of the unreadable results, we’re left with these:

We’ve got some embedded information here about some .pdb file. This file, if it were available, would contain formation (like function prototypes) that would make debugging much easier. The binary probably imports the C runtime (which we can tell from MSVCR120.dll), and it was probably compiled with Visual Studio 2013–information we can glean off the 120 version number in the .dll. It looks like the binary calls printf, but we can’t really infer much more.

We can confirm our suspicions about what functions the file calls with the Dumpbin utility, which is available as part of Microsoft Visual C++ (you can obtain this e.g. by installing Visual Studio 2013). Once you have it installed (one way or another), you can put it on your PATH. Mine could be found here:

Dumpbin is a powerful utility. We’ll use it to view the functions that our binary depends on:

Here are the results:

After staring at enough Dumpbin dumps, it might be possible to tease out some unusual functions in here, but it’s tough to say for sure. One thing that does stick out is the printf import.Maybe we can try running the binary to see what happens (although, I totally understand if you wouldn’t want to run it without having comiled it yourself!)

Nothing seems to have happened. We still really don’t know what our binary is doing.

IDA will do a whole bunch of work at this point trying to disassemble your file.

Let’s do a very quick orientation to IDA. First thing to notice is the slider:

This slider allows you to click into a region of the binary and investigate its contents. For example, the pink region contains all of the .idata which is PE Format speak for all the imports. You can see function definitions that should correspond with our Dumpbin analysis from earlier (side project: investigate the “Exports” and “Imports” tabs to see if they correspond with the output we found).

Clicking into a blue region navigates us to a .text section that contains all of our executable code (assembly): 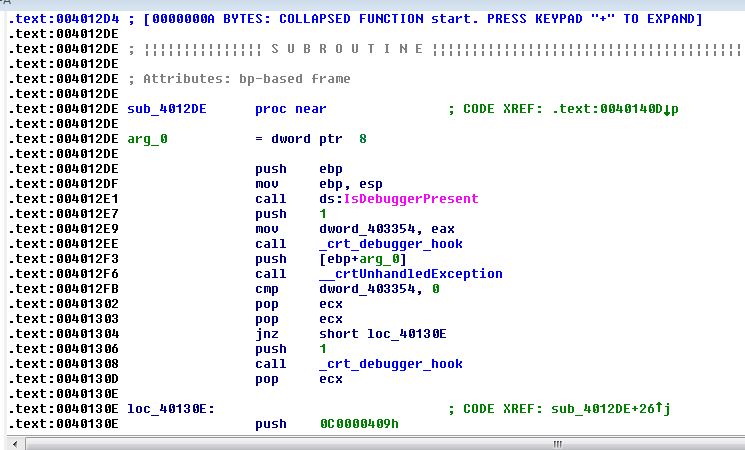 You can scroll through this disassembly and, in theory, figure out what’s going on from here. Fortunately, IDA has a graph version of this “IDA View” which can be accessed by pressing the Space bar: 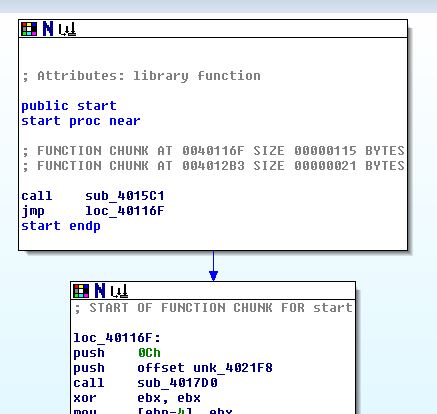 This view is perhaps what IDA is best known for: each block represents a chunk of code, and the lines represent jumps between the code blocks (both conditional and unconditional). This is much, much easier to follow than scrolling through pages and pages of disassembly.

The final window we’ll explore is the strings view: 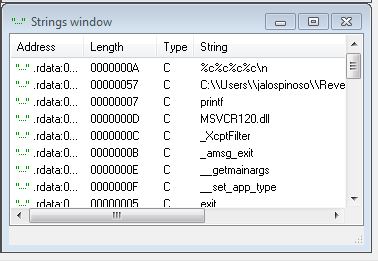 You’ll notice that the output corresponds with what we got from running Strings earlier.

There are a great many ways to start analysis of a binary in IDA, but the most important thing to keep in mind is what your goal is. As you’ll see, this binary is extremely simple–but it would take quite a bit of time to step through the assembly code line-by-line to try to figure out what’s going on.

Well, we ran the binary and nothing happened, but there’s a printf statement that showed up in both Strings and Dumpbin. Take a look at the Strings window and identify the printf line. It should appear at .rdata:0040232A. Let’s have a look at the Imports tab: 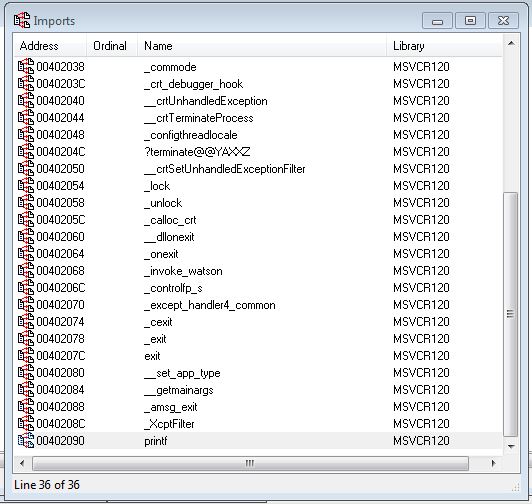 I’ve highlighted the line where printf is imported from MSVCR120.dll. Let’s click on this entry, which brings us into the end of the .idata section:

The IDA hotkey x is immensely useful here. We’d like to find out where else in the binary this import is referred to. After clicking on printf, press x:

We can see here that printf is referred to one time in a subroutine (sub_401000). Let’s click on it and enter the graph view around this call. 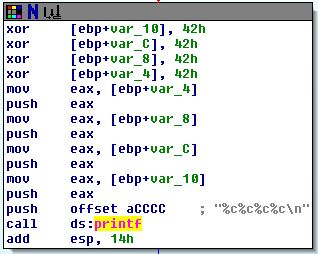 This codepath looks like it is setting up a printf:

Arguments are pushed onto the stack from right-to-left in all modern calling conventions (including __cdecl, usually the calling convention for printf style). We can then see that printf is called with the arguments

Let’s track these characters throughout the code. ebp is the stack base pointer, and positive offsets are local variables (not hugely important if you are not familiar with how functions are setup in x86 assembly).

IDA helps us out by labeling each of these variables var and their positive offset from ebp (notice they are 4 byte offsets, starting with 4). We can rename these variables throughout the code to help us in our investigation. Simply click a variable, type n and enter a new name. Here, I’ve chosen to name each character by its order in the printf call: 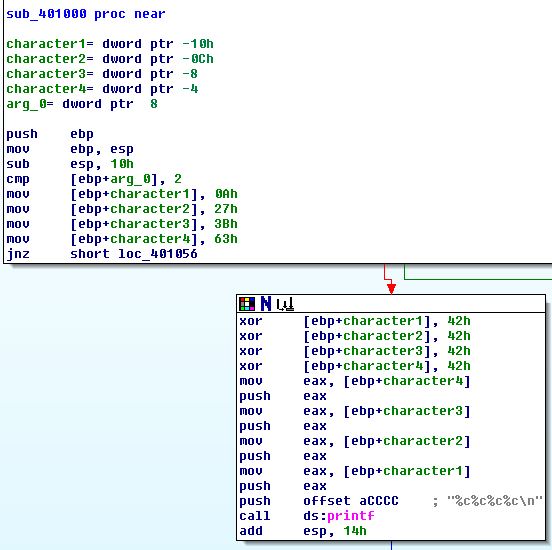 Now it should be a little clearer what’s going on. First, the stack gets set up with a base pointer, and 16 bytes (10h) are set aside for local variables:

Next, the first and only argument to the function, arg_0 is compared with 2,

and our four characters are given initial values:

Next, we have a jump conditional:

Putting it all together

Okay, so static analysis of this function tells us that it takes a value, and if that value is 2, we print four characters. If not, we exit. Let’s name the function PrintIfTwo by selecting its current name, sub_401000, and pressing n:

Now that our function is named, let’s see where it’s getting called. With PrintIfTwo still selected, press x. It seems that it’s only called from one location, so select it. 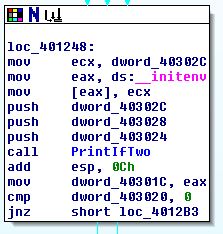 It turns out that __initenv is the last function that the C Runtime invokes before handing off control to our code. Our JumpIfTwo function takes one argument, so we are only interested in the last variable to get pushed onto the stack just before our call: dword_403024. Let’s rename this PrintIfTwoArgument and press x again to see where this variable is set.

The only other function calling PrintIfTwoArgument is sub_401124+2b. Let’s navigate there and see what’s going on:

So our argument is argc, the number of tokens given at the command line (including the name of the binary!)

Let’s go back and try running the program with one argument:

Notice that it wouldn’t work with more than one argument (more than two tokens):

Even for this exceedingly simple binary, the reverse engineering process took us through a lot of steps. Nugging through assembly is rough going, but it can be made bearable through the use of smart tools like IDA (and, of course, MSDN).

It’s really simple to get started reversing on your own! Write your own programs (or take the programs of others) and try to figure out how it does what it does.

The project is available on Github. To clone, simply issue the following command:

The PDB is available here.